Description :
The Miniature Schnauzer is a small, sturdily built, little dog. The body is square in proportion. The strong head is rectangular in shape. The width of the head gets slightly smaller from the years to the eyes. The muzzle is strong and ends rather bluntly. The nose is black. The bite is scissors. The deep-set, small eyes are dark brown in color. Ears set high on the head are often cropped to a point. When the ears are left natural they are small and V-shaped folding close to the head. The front legs are straight. The docked tail is set high and carried erect. The tail is cropped just long enough so that it can be seen over the backline of the dog. Note: it is illegal to crop or dock a dogs ears or tail in most parts of Europe. The Mini Schnauzer has a double coat. The outer coat is wiry and the undercoat is soft. The coat is clipped so it has a bushy beard, mustache and eyebrows. Coat colors include black, white, salt and pepper, and black and silver.

Temperament :
The Miniature Schnauzer is an intelligent, loving, happy dog. They are energetic, playful and get along well with children and like to be with their people. Affectionate, keen, devoted and docile. With proper leadership they can get along with other dogs. Socialize this breed well. They make good companions and family pets. The Mini Schnauzer will not listen if they sense they are stronger minded than their owner. Owners need to be calm, but firm, possessing a natural air of authority. They do not have a yappy bark, but rather sounds like a low, carried-out howl of a voice. This breed makes a good watchdog and vermin hunter. An easy dog to travel with. Some can be reserved with strangers if the humans do not provide stability in their lives, but most love everyone. Socialize them well. Do not allow this little dog to developed Small Dog Syndrome, human induced behaviors where the dog runs the home. This can cause a varying degree of behavior problems, including, but not limited to separation anxiety, willful, nervous, barky, guarding, bold, sometimes temperamental, not hesitating to attack much bigger dogs. A well balanced dog, who gets enough mental and physical exercise will have a totally different personality. These are not Miniature Schnauzer traits, but rather behaviors brought on by the way the dog is treated by the people around them. It is all up to the humans. As soon as the humans start being true pack leaders, the dogs behavior will change for the better.

Living Conditions :
The Miniature Schnauzer is a good dog for apartment life and will be calm indoors so long as they get enough exercise.

Exercise :
These energetic little dogs need daily, long, brisk, walks or jogs, and love play sessions off the leash. While out on the walk the dog must be made to heel beside or behind the person holding the lead, as in a dog's mind the leader leads the way, and that leader needs to be the human. Dogs who do not get to go on daily walks are more likely to display behavior problems. Teach them to enter and exit door and gateways after the humans.

Life Expectancy :
About 15 years. It shows no signs of age until quite late in life.

Grooming :
The wiry coat is not hard to groom, although it does need attention. Comb and brush daily with a short wire brush to prevent matting. If any appear they should be cut out. They should be clipped all over to an even length twice a year, in spring and fall. Trim around the eyes and ears with blunt-nosed scissors and clean the whiskers after meals. On pet dogs the coat is usually clipped short on the upper body and left somewhat longer on the under-parts, legs and head. Show dogs need to be hand stripped and trimmed instead of clipping. This breed sheds little to no hair and is a good dog for allergy sufferers.

Origin :
The Miniature Schnauzer is a German breed. During the years around the turn of the century, both smooth German Pinscher and coarse-haired Schnauzer pups appeared in the same litters. The German Pinscher Schnauzer Club initiated a policy requiring proof of three generations of pure coarse-haired Schnauzer coats for registration. This quickly helped set type and made them a distinct breed from the German Pinscher. These Schnauzers were given the name Standard Schnauzer. Miniature Schnauzers were developed by crossing small Standard Schnauzers, with the Affenpinscher and possibly the Poodle. The Schnauzer name derived from the German word "Schnauze", which means "muzzle". It was used as a ratter and still retains the ability, but is mostly a companion dog today. Some of the Schnauzer's talents include: hunting, tracking, ratter, watchdog, competitive obedience, and performing tricks. 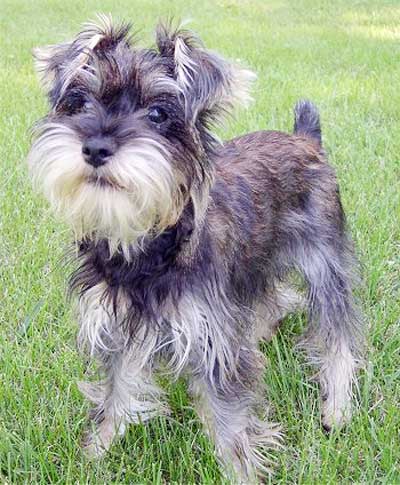 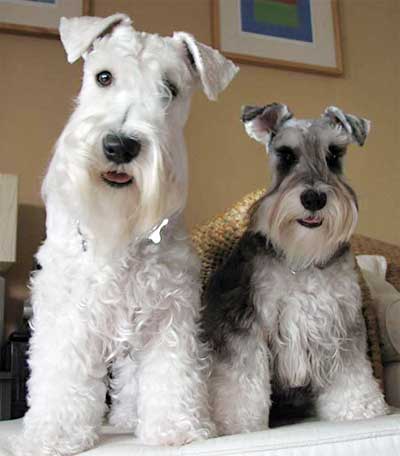