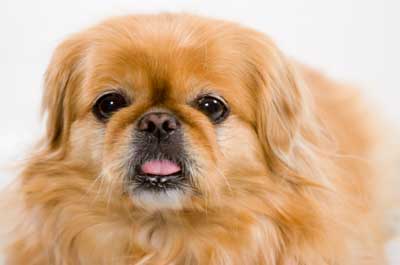 Description :
The Pekingese is a small, well-balanced, compact dog. It has a stocky, muscular body that is slightly longer than it is tall. The head is large in proportion to the rest of the body, with the top of the head being massive, broad and flat. The front of the face is flat. The muzzle is broad and flat, thicker below the eyes separating the upper and lower areas of the face. The skin on the muzzle is black. The black nose is broad and short. Teeth meet in an under bite with a broad jaw bone. The large, prominent, round eyes are set wide apart with black eye rims. The ears are set on the front corners of the top of the skull, are heart-shaped, laying flat against the head. They are well feathered so that they appear to blend with the head giving it a rectangular look. The neck is short and thick. The legs are short, thick and heavy-boned. The tail is high-set, slightly arched and carried over the back. The outer coat is long and coarse in texture with profuse feathering. The undercoat is soft and thick. The coat comes in all colors, sometimes with a black mask.

Temperament :
Pekingese are very brave little dogs, sensitive, independent and extremely affectionate with their master. These adorable dogs can make wonderful companions. If overfed, the Pekingese will quickly become overweight. This breed makes a good watchdog. The Pekingese may be difficult to housebreak. Do not allow this dog to develop Small Dog Syndrome, human induced behaviors, where the dog believes he is pack leader to humans. This can cause varying degrees of negative behaviors, including, but not limited to obstinate, self-willed, jealousy, separation anxiety, guarding, growling, snapping, biting, and obsessive barking as the dog tries to tell YOU what to do. They can become wary of strangers, and may become untrustworthy with children and even adults. If you feed them table scraps, they have been known to refuse to eat, as much to show dominance over its owner, as to lack of appetite. They can become dog aggressive and courageous to the point of foolhardiness as they try and take over. These are NOT Pekingese traits. They are behaviors resulting from humans allowing them to take over the home. If a Pekingese is given rules to follow, limits to what they are and are not allowed to do, along with a daily pack walk to relieve their mental and physical energy, they will display a totally different, more appealing temperament. It is not fair to leave such a heavy weight on such a small dog, where he feels he has to keep HIS humans in line. As soon as you start showing your Peke you are able to be HIS strong, stable minded pack leader, he can relax and be the wonderful little dog that he is.

Living Conditions :
The Pekingese are good for apartment life. They are relatively inactive indoors and will do okay without a yard.

Exercise :
Pekingese need a daily walk, where the dog is made to heel beside or behind the person holding the lead, as instinct tells a dog the leader leads the way, and that leader needs to be the human. Play will take care of a lot of their exercise needs, however, as with all breeds, play will not fulfill their primal instinct to walk. Dogs who do not get to go on daily walks are more likely to display behavior problems. They will also enjoy a good romp in a safe open area off lead, such as a large fenced in yard. Get your Pek accustomed to the leash when they are still a puppy. Some owners have told me their Pek will walk up to 4 miles on a nightly walk.

Grooming :
Daily combing and brushing of the very long, double coat is essential. Take extra care around the hindquarters, which can become solid and matted. Females shed the undercoat when in season. Dry shampoo regularly. Clean the face and eyes daily and check the hairy feet for burrs and objects that stick there. These dogs are average shedders.

Origin :
The Pekingese received its name from the ancient city of Peking, which is now called Beijing. They were considered sacred dogs regarded as a legendary Foo Dog that drove away spirits. They could only be owned by Chinese royalty and was regarded as semi-divine and if you stole one of these dogs you were put to death. People without noble rank had to bow to them. When an emperor died, his Pekingese was sacrificed so that the dog could go with him to give protection in the afterlife. In 1860 the British overtook the Chinese Imperial Palace. Chinese Imperial Guards were ordered to kill the little dogs to prevent them from falling into the hands of the "foreign devils". Five of the Pekingese survived and were given to Queen Victoria. It was from these five dogs that the modern day Pekingese descended. In 1893 the breed was first shown in Britain. The Pekingese was recognized by the AKC in 1909. 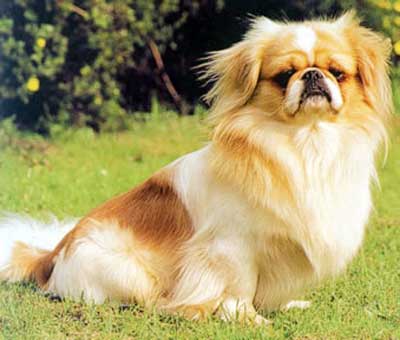 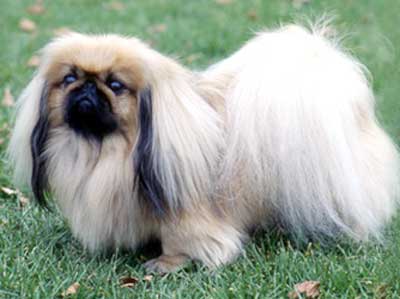